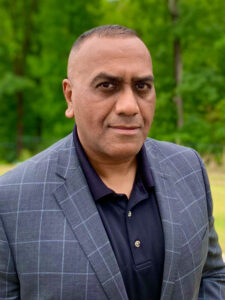 Clint Eastwood Karamath is a proud “Army Brat” and lived in various military installations around the world. Upon graduating from the United States Military Academy at West Point, NY in 1991, Clint was commissioned as an Infantry Officer. After completing Airborne, Air Assault, and Ranger School, he served in numerous Infantry assignments and positions including; leading a Bradley Fighting Vehicle platoon in Korea, commanding an Airborne Infantry Company in combat with the 82d Airborne Division, and serving as a Brigade Operations Officer at Fort Benning, GA.

Clint then became a Force Management Officer and served in the United States Army Pacific (USARPAC), the Mission Command Center of Excellence, the US Special Operations Command (SOCOM), and finally the Cyber Center of Excellence. He served three combat tours and his awards include; the Combat Infantryman’s Badge, the Ranger Tab, Senior Parachutist Badge, Air Assault Badge, and Bronze Star Medal.

Upon retirement in 2021, Clint continued to serve in the Department of Defense, by joining the Cyber Center of Excellence at Fort Gordon, GA as a Department of the Army General Service (GS) civilian.